Contents of this page

Whiffletree Winter Social was held at Napoli’s Italian Restaurant and was attended by 102 Whiffletree neighbors.  In addition to the great food, everyone had a great time meeting neighbors.  Thanks to Karen Slott, Social Chairperson, as well as the management and team at Napoli’s for a fantastic evening.

Survey Results From Our Neighborhood

CLICK HERE to see the survey results. The survey highlighted that there are many special people in Whiffletree that care about their neighbors and their community. The survey also highlighted that we can do more to engage with our neighbors. The Whiffletree HOA leadership is reviewing the survey results and will develop an action plan to improve upon our communication and engagement. Again, thanks for taking the time to respond to the survey and for your inputs. 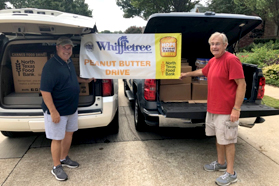 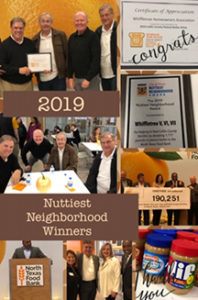 Thanks to the generous support of our Whiffletree neighbors, we donated 1,717 pounds of peanut butter this year to the North Texas Food Bank Peanut Butter Drive, up from 1,012 pounds in 2018.

Every September, the North Texas Food Bank hosts a peanut butter drive to help combat hunger in Collin County. Plano Mayor, Harry LaRosilliere, a strong partner of this drive says, “This is the time of year where our community comes together to spread hope with their generosity and care." This year, City of Plano Neighborhood Services sponsored an award called the “The Nuttiest Neighborhood” to be awarded to the neighborhood that collects the most peanut butter per household.

Whiffletree was recognized at North Texas Food Bank (NTFB) Peanut Butter Drive Awards Ceremony for the tremendous contribution made by Whiffletree neighbors.  We were awarded Nuttiest Neighborhood Award by Mayor Harry LaRosiliere.  We thanked the Mayor for this award and received it in honor of all the Whiffletree neighbors that donated to the peanut butter drive.

During the ceremony, which recognized the contributions of neighborhoods, businesses, community organizations and cities & towns to this event, NTFB announced that they raised 190,251 pounds of PB, more than 3X what was raised in 2018, an outstanding effort by so many people and organizations in Collin County.  Whiffletree was proud to have made a significant contribution to this achievement, all because of you, our neighbors!

National Night Out (NNO) is an annual event hosted by the National Association of Town Watch and occurs the first Tuesday in October. The Plano Police Department participates in National Night Out and is proud of the commitment our community has to this program.”

“The primary purpose of National Night Out is to get neighbors to leave their front porch lights on, showing their support with their local police departments in the fight against crime. Neighbors are encouraged to get out of their houses and meet other neighbors in the area and get to know them. The theory being that if neighbors meet and get to know each other, they are more apt to report suspicious activity in their neighborhood rather than “look the other way” when they see something noteworthy. When you know your neighbors and watch out for them, overall crime in the area is reduced.”

Whiffletree HOA has proudly participated in NNO for several years to encourage neighbors to meet neighbors as well as police and fire personnel.  On October 1, there were 60 Whiffletree neighbors at NNO, which was held at Prairie Meadow Park and catered by Henry’s Ice Cream.  We also hosted a large contingent of neighbors from adjoining Estates of Forest Creek (EFC) as well as a number of Plano Police and Fire Department personnel.

We want to thank Tom Moore for his work to make NNO a success and for all our neighbors (and EFC neighbors) who joined us and the Plano Police and Fire personnel.

The project to replace the screening wall along Legacy Drive is getting close.  It is now scheduled to start in April although weather could delay its start.

During the construction, we can expect the following to occur:

When the wall is completed, the contractor will remediate the entrances, including electrical and sprinkler service. The City of Plano Project Manager instructed Whiffletree HOA (WHOA) to obtain bid to replace the plantings at the Harvey and Marchman entrances for review and reimbursement by the City of Plano.

WHOA board has been following this project for several years and is pleased that it is finally getting close. We will continue to monitor this project closely to ensure that the impacted residents and the entrances are handled as committed. 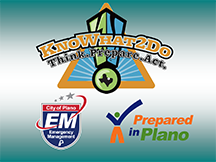 City of Plano Emergency Management held a recent workshop on how emergencies are handled in the area and recommended steps for residents to take to protect their families.  The most important recommendation was to sign up for Plano City Call notification, which is a service that provides emergency notifications by email, phone (voice message recording) and/or text.  The service is similar to the Amber alerts that you may occasionally see on your phone.  On the website (https://public.coderedweb.com/CNE/en-US/925A63E78022) you can tailor which type of alerts you want to receive and by what method (phone call message, text and/or email). This service also includes notification of road/traffic issues on many of the local major roads around Plano area.

Also, in the package of information supplied at this workshop, it is recommended that residents prepare for possible emergency by having a personal safety plan and a safety kit with several items that might be useful in the event of a serious emergency (see slides 21-25 of EmergencyPreparedness presentation).

Presentation Made at City Workshop on "Best Neighborhoods" Program

On February 20, Plano Neighborhood Services held a workshop to assist Homeowners Associations (HOAs) to apply for and be recognized with BEST Neighborhoods Designation. As part of the workshop where Neighborhood Services personnel described the application process and key factors in the evaluation process, Whiffletree HOA (WHOA) was asked to present to the attendees how Whiffletree achieved Platinum level (highest level) recognition by the City of Plano.

Bill Ostergren, WHOA Treasurer, and Tom Dixon, WHOA Beautification Committee Chairman, presented to the audience of over 30 people, representing more than 10 HOAs. Whiffletree was the only HOA presenting to the group. The presentation was very well received and triggered several questions (CLICK HERE to view the WHOA presentation).

WHOA was honored to make this presentation and share its experience with the BEST application process and to showcase what a fantastic neighborhood Whiffletree is. Special thanks to Tom Dixon and Bill Ostergren for their work on preparing the presentation and for such an outstanding job of communicating what Whiffletree does to make it an exceptional neighborhood. Great job guys!